For One More Day Book Summary 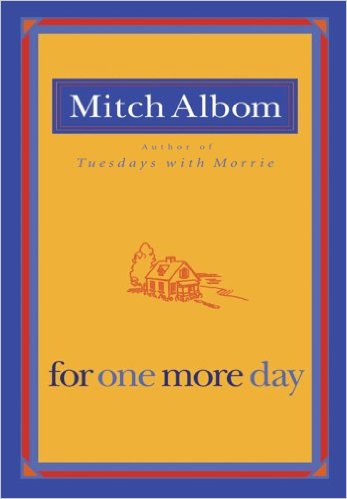 What if you only had one more day with a loved one? Would you do anything different than what are you are doing today?  For One More Day is the story of a mother and son, and about a relationship that lasts a lifetime.

For One More Day, by Mitch Albom, explores the following question: what would you do if you could spend one more day with a loved one?

If you only had one more day to spend and have fun with a loved one, how would the day look?

For One More Day is a story about a man who becomes unconscious and “lives” a day with his passed away mom.

Book Summary of For One More Day

At the beginning of For One More Day, we meet Charley “Chick” Benetto: a former baseball player turned salesman and an alcoholic shunned by his wife and daughter.

Chick is tormented by his past decisions surrounding his early adulthood and his relationship with his mother and father.

During the first few chapters of For One More Day, we are introduced to Chick and learn more about his youth.

When Chick was about 5 years old, his father told him, “You can be a momma’s boy or a daddy’s boy, but you can’t be both.” Chick decided to be a daddy’s boy, and this decision turned out to be the wrong one.

His father and mother become divorced when he was about 10 years old. Through the rest of his childhood, his mother protects him and looks to steer him down the right path.

For One More Day is the story of the missed opportunities Chick had during his youth, and the consequences of not being there for his loved ones.

Chick Tries to “End it where it started”

After learning about Chick’s past, we are brought back to the present day.

Chick’s daughter is getting married, and Chick is fed up. He is sick of his unfulfilling work, and when he finds out his own daughter didn’t invite him to her wedding, he gets even more depressed.

Upset and sad, Chick decides there is no point of living anymore and will drive to his hometown to “end it where it started.”

After getting drunk, Chick hops in his car to drive back to his hometown. He is almost to his hometown and misses the exit. It is late at night, and frankly, Chick doesn’t care about his life. He does a 180 and starts driving the wrong way – right into a semi-truck. Chick is ejected from his vehicle, he hits the wet grass and goes unconscious.

At this moment, he starts his last day with his mother (who passed away 8 years ago).

A Last Day with Mom

When Chick becomes unconscious, his thoughts take him to his childhood house. There, he sees his mother.

His mother cooks him up some breakfast and is cheerful as ever.

“Posey” Benetto is a social magnet, a darling, and always looking to help out. Early in life, she grinded to make ends meet and was loved by many. Given Chick’s decisions in childhood, it is sad he didn’t show respect to such an amazing woman.

Sometimes, when someone is given the world, they might not realize how good they have it until it’s gone.

Throughout the rest of For One Last Day, we learn more about Chick’s childhood, his relationship with his mother and father, and the actions he took in adulthood which lead him down a rough path.

During his dream, his mom takes him along with her to visit some friends who are dying. While she has been passed away for 8 years, she says she is still alive through other people’s memories.

Chick Wakes Up and Changes his Ways

After seeing others dying, seeing a different perspective, and learning more about his family, Chick becomes remorseful and decides to change his ways.

At the end of the book, he wakes up in the arms of a police officer and swears off drinking.

After recovering from his car crash bumps and bruises, he gets back in touch with his daughter and wife, and becomes a great contributor to society.

For One More Day is an inspiring story which shows that it’s possible to change your life for the better if you so choose.

Takeaways from For One More Day

The main takeaway from For One More Day was that life is short and spending time with the people who matter most to you is so important.

Last Easter, I was with my sisters, parents, grandparents, and my 93-year old great-grandpa.

I love my family – they are fun loving, nice, and supportive of my life. We went to church, did an indoor and outdoor Easter egg hunt, ate lunch, and played badminton and basketball outside throughout the day.

The one thing that stuck in my mind was saying good bye to my great-grandpa. I hugged him good bye and he grabbed my hand.

I could see the sadness in his eyes, almost to say to me, “I wish I was your age again.” Being 93, it’s unfortunate, but his days are numbered.

After reading For One More Day and interacting with my great-grandpa, I’m trying not waste days doing things I don’t want to do.

It’s easy to say things like, “Life is short, don’t waste any of your days”. But, how many people actually implement this thought and live intentionally?

With loved ones, it’s important to set time aside and look to make an effort to spend time with them.

Our Recommendation for For One More Day

In For One More Day, Mitch Albom turns a story of a broken man trying to commit suicide into a beautiful tale examining the mother-son relationship.

Mitch Albom is a fantastic storyteller and writer. For One More Day has influenced my thoughts and actions to not waste time on Earth.

I was reminded it’s important to work on cultivating relationships with people closest to you, no matter what. Family is #1 – your parents, grandparents, kids, and siblings are some of the only people who will be with you throughout your entire life.

For One More Day is a must-read for everyone.

What would you do if you had one more day with a lost loved one?