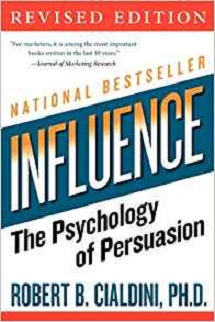 How are some sales people able to persuade people to buy their product? How do certain sales people seem to be able to influence potential customers towards a sale? Is there a science to their sales methods? Are there principles of persuasion which you should be aware of to combat these methods?

Influence: The Psychology of Persuasion, by Dr. Robert Cialdini, is an incredible book all about how to influence, persuade and the principles of persuasion.

Dr. Robert Cialdini is the psychology expert in the rapidly expanding field of influence and persuasion.

His thirty-five years of rigorous, evidence-based research along with a three-year program of study on what moves people to change behavior has resulted in this highly acclaimed book.

Influence explains the psychology of why people say “yes”—and how to apply these understandings.

Through Dr. Cialdini’s extensive research, he has identified the 6 key principles of persuasion, and shares them with us in this fantastic book.

Book Summary of Influence: The Psychology of Persuasion

Have you walked into a store, chatted with a sales manager, made a purchase, and then regretted the purchase upon driving home?

Have you ever received a sales phone call, and then produced to purchase whatever junk the salesman was making?

What about donated to a cause you didn’t actually believe in, but were sold on through your conversation with the volunteer?

Enter Influence: The Psychology of Persuasion and the 6 principles of persuasion.

How to Influence and The 6 Principles of Persuasion

Influence is all about human psychology and how we, as humans, can be persuaded to do different things based on different stimuli and information.

In Influence, Dr. Cialdini argues there are six universal principles of persuasion:

These principles are so powerful that they generate substantial change in a wide range of circumstances. Some of these principles you are probably aware of, while other principles of persuasion you might be learning for the first time.

Now, let’s go deeper into each of the 6 universal principles of persuasion I listed above.

The Principle of Persuasion of Reciprocity

The first universal principle of persuasion is reciprocity.

People are more willing to comply with requests (for favors, services, information, concessions, etc.) from those who have provided such things first.

If you receive a gift, a service or a favor from someone else, then you are more likely to give something back to that person.

Humans naturally hate being in debt to someone else, and so even a small gift or favor can lead to larger reciprocation.

For example, according to the American Disabled Veterans organization, mailing out a simple appeal for donations produces an 18% success rate; but, enclosing a small gift (personalized address labels) boosts the success rate to 35%.

Give and you shall receive! That’s the power of reciprocity.

Another way reciprocation works to persuade is when companies offer you a service or product at a higher price, but then follow up with a lower price.

By making this concession, it seems like they are doing you a favor!

The Principle of Persuasion of Scarcity

The second universal principle of persuasion is scarcity.

People want more of the things that they can have less of.

Grandma’s cookies come to mind – growing up, I could only have 2 cookies after dinner, but I always wanted more!

People find objects and opportunities more attractive to the degree that they are scarce, rare, or dwindling in availability.

Even information that is scarce is more effective. How many advertisements have you seen where the commentator says, “For a limited time, act now!”?

A beef importer in the US informed his customers (honestly) that, because of weather conditions in Australia, there was likely to be a shortage of Australian beef.

His orders more than doubled. However, when he added (also honestly) that this information came from his company’s exclusive contacts in the Australian National Weather Service, orders increased by 600%!

Many businesses will use sales to make it appear as though something is scarce. Now that you know about this principle of persuasion, you’ll want to be on the look out for it!

The Principle to Persuasion of Liking

The third universal principle of persuasion is liking.

People prefer to say yes to those they know and like. You are much more likely to help your friends and family than a stranger on the street.

If you are looking to persuade someone, becoming that person’s friend and ally is definitely a good strategy.

Through asking good questions, learning about the other person, identifying what problems that person is trying to solve, and by looking to be of value, you can get the other person on your side.

Friends like doing things their friends are doing, and by becoming familiar to the other people you are interacting with, you can tap into the principle of liking.

The Principle of Persuasion of Authority

The fourth universal principle of persuasion is authority.

This principle of persuasion is pretty straightforward and something we usually learn early on.

The principle of authority is that the greater the perceived authority of the person, the more likely you are to comply with their demands and comments.

People are more willing to follow the directions or recommendations of a communicator to whom they attribute relevant authority or expertise. These authorities include doctors, lawyers, businesspersons, police officers, etc.

We generally trust people with credentials and a lot of education.

One study showed that 3 times as many pedestrians were willing to follow a man into traffic against the red light when he was merely dressed as an authority in a business suit and tie.

Authority is very powerful and should be used carefully.

You will see this a lot on mainstream news where “experts” come out and give their opinions on certain topics.

It’s important to think critically for yourself when these situations occur.

The Principle to Persuasion of Social Proof

The fifth universal principle of persuasion is social proof.

People are more willing to take a recommended action if they see evidence that many others, especially similar others, are taking it.

One researcher went door to door collecting for charity and carrying a list of others in the area who had already contributed. The longer the list, the more contributions it produced.

Another example is bartenders who will stuff the tip jar to make it seem like they already have received a lot of tips during the night.

That’s the power of social proof as a tool for persuasion.

Another example of social proof is letters of recommendations. If you are being recommended by others, then it is usually a sign you are competent and ready to get the job at hand done.

The Principle to Persuasion of Commitment/Consistency

The sixth universal principle of persuasion is commitment/consistency.

Naturally, humans do not like to contradict themselves because consistency is a socially attractive trait.

It looks bad if you say you are all about health, but you eat a horrible diet and don’t exercise.

Likewise, it is admirable if you say you are all about health, and lead an active and healthy life.

People are more willing to be moved in a particular direction if they see it as consistent with an existing or recent commitment. “You are a nature loving person and our conscious about your health. Would you like to try some organic food that was made without harming the Earth?”

Consider how small that commitment can be and still motivate change forcefully: Gordon Sinclair, a Chicago restaurant owner, was beset by the problem of no-shows—people who made table reservations but failed to appear and failed to call to cancel.

That’s the power of commitment as a way to persuade.

Takeaways from Influence: The Psychology of Persuasion

The main takeaway from Influence: The Psychology of Persuasion is the power of words.

By changing how you say certain statements and ask certain questions, you can guide a situation towards the result you want.

Everyday, we are bombarded by sales ploys and deceitful techniques. There are many people out there who are trying to make a quick buck.

Now that I’ve learned about these six principles of persuasions, I will be able to have a better handle on my thinking and decision making going forward.

Through understanding these different techniques of persuasion, we can do a better job of avoiding some of these sales traps and psychology tricks.

Our Recommendation for Influence: The Psychology of Persuasion

Influence: The Psychology of Persuasion will help you gain a better understanding of the human mind and human behavior.

If you are in sales, or deal with clients on a regular basis, Influence: The Psychology of Persuasion is a must read!

Even as a consumer, or as someone interested in psychology, Influence is a fantastic book. Influence will open your eyes to some of the tricks and techniques of big corporations and sales companies.

After reading, you’ll learn how to become a skilled persuader and also learn how to defend yourself from people who want to persuade you!