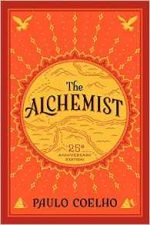 Yesterday morning, I sat down with The Alchemist and 6 hours later finished it. Wow, what a book. I’ve read a fair number of books in the past few years, but none of them have kept me on the edge of my seat like The Alchemist.

Summary of The Alchemist

In the beginning of The Alchemist, the boy has a dream about treasure and he goes to see a gypsy about it. The gypsy tells the boy the treasure is by the Pyramids of Egypt. After his meeting with the gypsy, in which is didn’t like, he meets a peculiar character who introduces himself as the King of Salem. The King know all about the boy’s past and present, and tells him he should go searching for the treasure. The King speaks of each person’s Personal Legend and that by going to search for the treasure, the boy can realize his Personal Legend.

In addition to speaking of each person’s Personal Legend, the King talks about language of omens. “Everything in life is an omen. There is a universal language , understood by everybody, but already forgotten.” Omens are signs of the world and if interpreted and watched for, can enable humans interact and communicate with the world and non-human beings. Omens are very important for people trying to realize their Personal Legend.

Initially, the boy is a little bit hesitant, but then he then sets off on an epic journey that spans from Spain to Egypt. Along the way, he is confronted with different challenges and has to overcome them. He has to deal with thieves, to learn about being a crystal merchant, learn the ways of the desert, and speak the language of the world. At the end, he finds his treasure, but only because he followed through in trying to find his Personal Legend.

Remarkable Quotes and Passages from The Alchemist

Here are some quotes and passages which had an impact on me:

The Alchemist is a must read. The takeaways for me include living in the moment, never getting too high or too low, and realizing all things happen for a reason.

Have you read The Alchemist? What did you think?