The Power of Broke Summary 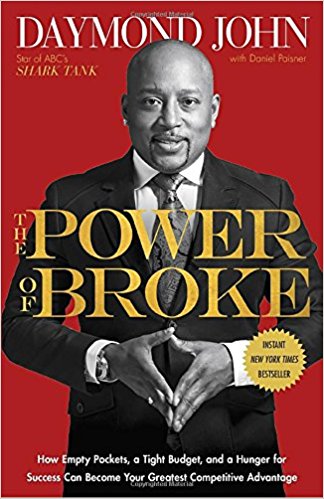 Have you ever been down to your last fifty dollars? You didn’t know where to go? Were you energized by the fact you had no where to go but up? What you experienced was the power of broke…

I was drawn to reading The Power of Broke because I’ve seen Daymond John on the popular TV Show Shark Tank and wanted to learn more about his story. In addition, I’m constantly looking to surround myself with the ideas of successful business owners and entrepreneurs. There is no better way than to read about them in books!

When your back is up against the wall, your bank account is empty, and creativity and passion are the only resources you can afford, success is your only option.

Summary of The Power of Broke

Daymond John has been practicing the power of broke ever since he was a teenager in Queens. With a $40 budget, Daymond started selling t-shirts to his friends out of the back of his van. Desperation breeds innovation – Daymond put his creative ways to work, growing his company over the years into the billion dollar brand FUBU. Each and every day, Daymond John wakes up and says to himself, “Rise and Grind!”

The SHARK Points of Business

Daymond John wrote The Power of Broke to tell the world it doesn’t require million dollar funding to build a brand and be successful in business. Essentially, to be successful as an entrepreneur, you must apply the SHARK Points of business:

When you have nothing to lose, you have everything to gain.

The Power of Broke Confirmed

The Power of Broke discusses the stories of a number of entrepreneurs who came up from nothing and applied the SHARK Points. The people profiled are from many different industries – music, social media, fashion, food, internet marketing, extreme sports, and consulting:

I loved reading about all of these people’s stories. It was truly eye opening and inspiring.

“The meaning of life is the process. The meaning of life is in the conversations we’re having right now, and you can have the same conversation with a waiter or a janitor or an executive at a top company. It’s all in the process, and in my case it’s in my commitment to add value anytime I interact with anybody. If you can get that in alignment, find a way to help someone else while you help yourself, then everything else flows.” – Jay Abraham

My Takeaways and Action Steps

With all books, I look to have a couple takeaways and action steps to apply in my life.

In Jay Abraham’s passage above, he talks about finding a way to help someone while you can help yourself. I completely understand his point and want to be able to provide value to many people. I’ve already started this by creating this blog and sharing my personal experiences. I’m also very happy that over 20 people have downloaded our free debt destruction tool in the past week!

Reading The Power of Broke pushed me this the weekend to think outside the box and look to expand my horizons. I’ve been watching the real estate market for some time now and have a goal in 2017 to buy another property. I did it over the weekend! Property #2!!

I had my offer accepted on a 2 bedroom, 1 bathroom place. The house needs some cosmetic upgrades to the bedrooms and living room. This will be a large undertaking over the next 3 months. I’m going to look to rent out  my current house which will bring the following tasks: finding renters, applying for rental license, and cleaning and fixing up the house and yard to get it ready. Then once I close on the other house, I’m going to paint, clean, and redo the floors of the new house! I’m excited and ready for the high stress period coming up.

UPDATE: I ended up not going through with the house due to foundation issues.

Our Recommendation for The Power of Broke

If you are looking to start a business and are looking for ideas, pick up a copy of The Power of Broke. You don’t need capital to start a business – Daymond John proves that by featuring numerous successful people who started with less than $1,000 in the bank. Get after it! Apply the SHARK principles: set a goal, homework (do yours), adore what you do, remember you are a brand, and keep swimming, and you will be on your way to success.

I’m very glad I read The Power of Broke. Even if you aren’t interested in business or entrepreneurship, reading about the stories of various people we read about is always interesting. For example, I didn’t know much about Tim Ferriss before reading The Power of Broke. I am glad I now know a little more of his story to success. All the stories energized me to get to work! RISE AND GRIND!!

Innovation happens from the bottom up, not the top down.

If you have been broke, did your motivation and results soar? Is frugality a psychological trick which forces us to save? Would you purposely stress yourself out to become success?