The Five People You Meet In Heaven Book Summary 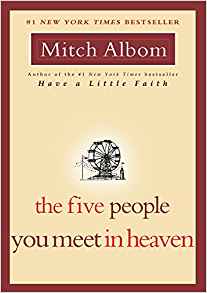 Throughout your life, have there been any situations where you have no idea why a certain result occurred?

Do you think there are any events from your past that didn’t have a big impact on your life, that potentially had a big impact on another person’s life? Why do we as humans view the world primarily from our own perspective and not consider other people’s views?

In The Five People You Meet in Heaven, Mitch Albom writes a fantastic story that will change everything you’ve ever thought about life after death and the meaning of our lives here on earth.

Everything you do and every interaction you have has an impact on someone else. We should be purposeful in our interactions with others to make the world a better place.

The Five People You Meet in Heaven is a novel which follows the life and death of a man named Eddie. In the novel, Eddie is killed and sent to heaven, and when arriving in heaven, he meets with the five people who had the most significant impact on his life when he was alive.

The rest of this post includes a summary of The Five People You Meet in Heaven, my takeaways, and my recommendation for you. Enjoy!

Summary of The Five People You Meet In Heaven

The beginning of The Five People You Meet in Heaven is a little bit sad. Eddie is an 83 year old man working at Ruby Pier. Ruby Pier is a fantastic attraction and amusement park for all ages and Eddie has been a ride operator and mechanic for many years.

Today is the last day of his life. Eddie doesn’t know it, but one of the rides will fail and he will be crushed by a passenger cart while trying to save a young girl.

After death, Eddie goes to heaven and meets 5 people. Instead of experiencing a lush garden of paradise, Eddie finds Heaven to be a place where your earthly life is explained to you by a number of people. Each person helps Eddie understand different parts and the unseen connections of his life. In addition to helping Eddie, I found that the lessons those people leave can apply in our lives.

The first person Eddie meets in Heaven is the Blue Man. The Blue Man was part of the freakshow attractions at Ruby Pier, where people could stare at others who were not normal. The Blue Man became blue because he drank silver nitrate (poison) in an attempt to help him with stomach problems. Over time, the poison changed the color of his skin!

The Blue Man tells the story of his death. One day, The Blue Man borrowed a car to practice his driving. Eddie was a young boy and was playing baseball in the yard. Eddie missed a ball and went to chase after it in the street. The Blue Man nearly hits Eddie, but swerves and keeps driving. The Blue Man is bothered by the event and stressed out. He has a heart attack and crashes in a nearby alley while Eddie is safe.

The Blue Man goes on to tell Eddie the lesson to be learned from this event. “…there are no random acts. That we are all connected. That you can no more separate one life from another than you can separate a breeze from the wind.”

We are all connected – every act we perform will have a direct impact on someone else. We may not realize it, but someone will be affected. You never quite know what the impact of a simple good deed will do for someone else! 🙂

“…there are no random acts. That we are all connected. That you can no more separate one life from another than you can separate a breeze from the wind.”

The second person Eddie meets is his captain from the Vietnam War. While in Vietnam, Eddie and his fellow soldiers were captured. For months, they were held in captivity and forced to work in a coal mine. Finally one night, Eddie was able to distract the guards with his juggling skills and the rest of the men took out the guards.

After the escape, the soldiers burned down the village with gas and fire. As the village was burning, Eddie thought he saw a shadow in one of the burning huts. He screamed out to it but couldn’t hear anything. He was very worried he was burning someone, and wouldn’t move. To get him out of there, the captain shot Eddie in the leg and they got out of their safely.

The captain then shares his story. Once Eddie was discharged due to his leg injury, he returned home. The captain kept going with the team and one day, he was driving down a path and came to a gate. He went to open the gate and walked around. On accident, he stepped on a land mine and was blown up.

Eddie was distraught at this point and didn’t understand why the captain had shot him or why the captain died in war and he didn’t. The captain said, “Sometimes when you sacrifice something precious, you’re not really losing it. You’re just passing it on to someone else.” The captain sacrificed his life for the rest of his team. Sacrifice isn’t bad if it’s helping others.

“Sometimes when you sacrifice something precious, you’re not really losing it. You’re just passing it on to someone else.”

The third person meets is Ruby – the Ruby of Ruby Pier. Ruby explains to Eddie his relationship with his father. Eddie and his father’s relationship was far from great – actually, they didn’t speak for years on end!

Eddie had been so angry with his father because he thinks his father has ruined his life. He blames his father for all the bad things that has happened to him.

While Ruby admits that Eddie’s father had been absent during his life, she says, “Holding anger is a poison. It eats you from inside.” Ruby shows Eddie how his father died – attempting to save a man’s life. At this point, Eddie realized how great a man his dad was, even with his quirks and felt sad he showed anger towards him.

“Holding anger is a poison. It eats you from inside.”

The fourth person Eddie meets in Heaven is Marguerite, his wife. Marguerite was the only woman Eddie ever loved.

Eddie and Marguerite’s marriage was not great – Marguerite put up with a lot of Eddie’s bad behaviors and emotional distance. Eddie still loved Marguerite with all his heart.

Upon seeing her in Heaven, he was overwhelmed with emotion. He missed her so much and was happy to see her. They talked about their past and how things ended. She became sick at 47 years old and passed away. Eddie wishes he could have spent more time with her on Earth. Marguerite explains, “Lost love is still love, Eddie. It takes a different from, that’s all.” If you love someone, even from afar, even if they are gone, it’s still love.

“Lost love is still love, Eddie. It takes a different from, that’s all.”

The fifth person Eddie meets in Heaven is Tala. Tala is the girl who was in the fire and was the shadow that Eddie saw. Tala is a young girl and badly burned. She was told by her mom to hide in the hut when the soldiers were burning the village.

The events in Vietnam are certainly sad, but Tala has a different view on it. Throughout his entire life, Eddie had been influencing and helping kids stay safe through his work. He walked around Ruby Pier and made sure all the rides would not break down. Tala explained that Eddie’s salvation lies in the work he did: keeping children safe.

We are all right where we’re supposed to be. We shouldn’t compare ourselves to others. Focus on our own work and let the world take you where it needs you most.

“We’re all right where we’re supposed to be.”

Takeaways from The Five People You Meet in Heaven

With all books I read, I look to have a few takeaways and action steps.

I’ve been studying emotional intelligence and interpersonal skills for a few years now, and I’m realizing more and more that to be successful with people, it is crucial to view situations from the other person’s point of view.

To interact effectively with others, I don’t need to be a smooth talker or someone who knows everything.

Rather, I will look to be a person who asks good, penetrating, and thoughtful questions and who is a good listener. Also, I will focus on reading body language and adjusting my actions accordingly to make the other person feel comfortable.

When I die, I want to look back and say I had a strong and lasting impact on people. I’m still working on myself and trying to get better so I can fulfill my goals.

Our Recommendation for The Five People You Meet in Heaven

Mitch Albom is an outstanding author and The Five People You Meet in Heaven had a significant impact on me. I’d recommend any of his books and believe they will have an impact on you as well.

The Five People You Meet in Heaven is an easy read and appropriate for all ages. Everyone is born, lives, and dies – the takeaways you might potentially have are endless.

As I mentioned above, my main takeaway is every event and every situation is connected. What happens through your eyes can be completely different than what happens through someone else’s eyes. People have different perspectives, different experiences, and come from different places; it is our duty to realize this to lead our interactions to  see the world through other people’s eyes.